New Year, lots of new starts! (a bit of a late post)

I've lost the blogjo at the moment. I'm hoping to blog a little more again and I'm starting by slowly catching up with saved posts; the start of January feels an incredibly long time ago now!

I got a few new starts going in January - some that are part of my WIPocalpyse goals, some that I decided to just try. I also got some materials to try new projects! 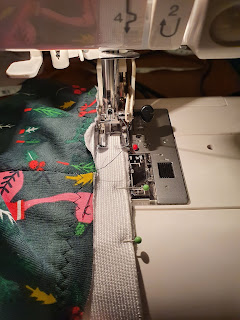 I also decided to add to my repertoire and finally start English Paper Piecing. There is a profile on Instagram that I have followed for some time: @naomialicec. Naomi hosts a focus cutting sew along, and has done for a few years. I have always been tempted to join and decided this was the year to do it. Here's a bit of a start to it: 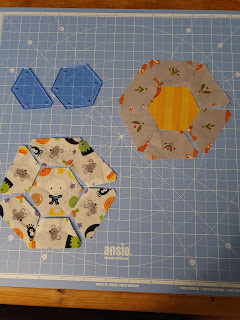 I bought some new fabric (of course!). The mermaid scales are waterproof fabric and will eventually become a Tilly and the Buttons Eden coat. The sewing jersey I have no plans for yet, but it will be some kind of top. Both were bought from Flamingo Fabrics: 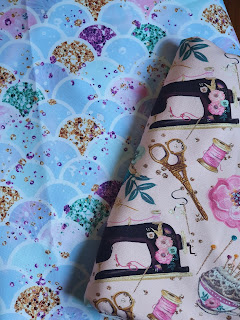 I took advantage of a sale at my local shop, Backstitch. I bought some embroidery transfers. I have been wanting to try embroidery for a few years, and in my spate of new starts, I decided now was the time to try it! 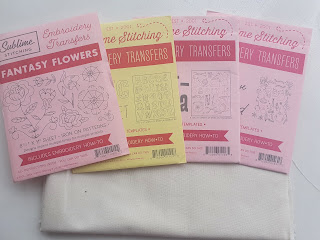 A final new start for me. I finally felt the cross-stitch itch, and began my Disney Dreams #3. This time, it will be The Little Mermaid. It is the most colourful of the 5 I own and I am so excited to get it done: 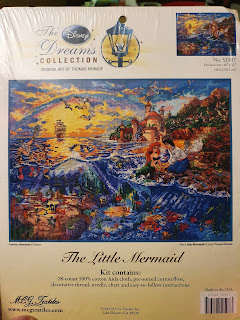 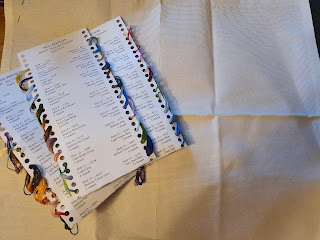 I possibly should not have started so much at once (and I have another project to add to the list but more on that another post). It's all been halted a little, and the most exciting sewing I have done in the past week or so is repairs of Darren's clothing and Bronwyn's Monkey. It was the toy we had with her when we brought her home, and she has it every night. The seam in the arm had come apart, but was easily fixed. She was very pleased to have him back! 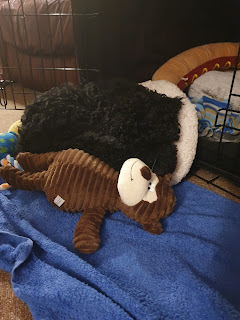 So happy you are back and I love your new cross stitch , I will enjoy watching it grow , enjoy your week.

Lots happening there Bethan, lots of new projects to get your teeth into! xx

Nice to see a blog post and some new starts on all sorts of projects.
My friend's daughter wants nto learn paper piecing. Is there a good book with clear visuals you can recommend? She's not good with words but is very good at sewing! She just needs pictures.

You have some exciting projects lined up to work on. Doing repairs is the "pits" but necessary at times.

Why not start a whole lot of new things??? - I am guilty of that constantly...(bad habit really...but it's fun)
I am looking forward to the fabrics coming to life and I know the cross stitch will be lovely.

Good to see you back - blogging seems to take a bit of time...but I like to look back and realise when I started some things.

Lovely to hear your crafty news, Bethan, lots of lovely new projects to keep you busy over this year.

Thank you for popping over to my blog to comment - you have been busy with your crafting with so many lovely new projects on the go 😊 We all get that 'non-blog-itus' and it is best to go with it, coming back to it when you are ready is probably the best thing to do 😊 x

I think many people have lost their mojo on lots of stuff; I think it is all this staying in the house because we are off our regular schedules. You certainly have many projects you added to your list! I googled the coat and it is cute! I am looking forward to seeing Ariel!

New Year, lots of new starts! (a bit of a late post)

I've lost the blogjo at the moment. I'm hoping to blog a little more again and I'm starting by slowly catching up with saved po...

Bethan
Just a friendly 30 year old ex-science teacher, who enjoys a few little hobbies! I live in Cambridge with my husband and am slowly filling our house with many, many craft supplies!