We Learnt To Sew Pyjamas!

Before the summer, my favourite/local sewing shop CallyCo sent out a newsletter with sewing courses. I signed up to learn how to sew a skirt in a day (yet to do, but so excited!). Darren was disappointed that he wasn't signed up to do the same course as it seems he'd like to make me some clothes! As it was a moderate difficulty course, I checked the newsletter and found a beginner course - making pyjama bottoms.

Queue a Saturday morning in July, the pair of us clutching our chosen material outside the shop, waiting to be taken to the cellar to be taught to sew.

We pinned patterns (turns out Darren is a whiz at doing this quickly and neatly), lined up the pattern if necessary (luckily it wasn't for mine, but Darren and a couple of other learners were getting slowed down by making sure their material patterns were neat!). 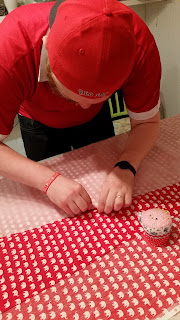 It was a fairly simple sew up the legs, which were folded in half so there would only be one seam. However, we had to do a zig-zag stitch to reduce frayed edges and so on (apparently an overlocker is good for this sort of thing). The zig-zag stitch drove me nuts; I get really frustrated if I can't do something right the first or perhaps second time of trying when it comes to sewing! I got there eventually, and even worked out where on the foot would be a good guide to ensure the zig-zagging was close enough to the edge, so hopefully next time it will be even better!! 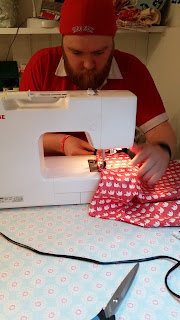 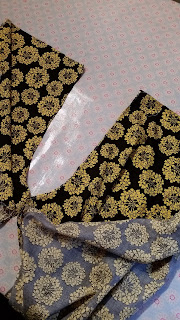 The final challenge was to make two button holes to pull the drawstring through. Annoyingly I put them on the wrong flap, but they are hidden (thank goodness!!) - and it gave me more of a chance to work out exactly where they should be on the right flap.

We both had to re-hem the bottom as we got a little tight for time and had rushed them and made some lumpy bumps (the class over-ran by an hour!), but overall we came out of a 4-5 hour class with some rather snazzy pajama bottoms!!

And the tutor and shop owner were both impressed that a husband and wife team want to learn to sew together!! 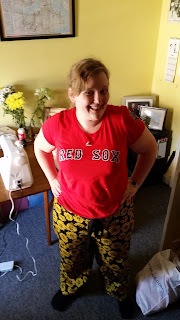 Hi Bethan... I'm impressed that you both went to sewing classes together . How nice. Great job on the PJ bottoms...
Interesting Cross Stitch of the heart in previous post...

Hi Maria. Thanks so much! Think we shall try to go to a class again as we enjoyed it so much!