I wrote a list of projects that I had outstanding, and whilst rifling through one of my sewing baskets, I found a half started cushion. I had bought the charm pack whilst at the Festival of Quilts (It was Moda Daydream, or something similar).

I started out making a cushion with a zig-zag effect pattern - goodness knows why, as I had hated working with that sort of pattern with my Hallowe'en material. I think I had come across a technique which helped align the triangles, and I wanted to try it out. So this is what I found in my drawer a month ago:

I'm really glad I had finished sewing the front, as I have no clue where the pattern was from! The annoying thing was that it had ended up rectangle rather than square; design guru Darren suggested I cut some material to make it square. I can tell you that drove me absolutely nuts. It worked, but did not end up anywhere as neat or as even as I would have liked; I had bought some backing and realised there wouldn't be enough for the size I had decided (my backing maths is shocking at the moment) and I wouldn't have time to go back for more.

I also had a lot of spare material, so decided on cushion number 2, from my Pillow Pop book that big sister gave me a couple of years ago. This was just lots of squares. The pattern called for aqua squares, with some red squares for a contrasting cross. As I was using the charm pack, I had to get a little more inventive.

Following the pattern, I also added a border. This was more even this time, but my iron started leaving yellow stains on the white material. It was at this point some foot stamping occurred! It just kept feeling like I was doing well, and then struggling and going about 5 steps back.

I had also ended up with thicker wadding than I would normally have, so that took a bit more maneuvering through the walking foot. And I think it didn't make it any easier when sewing on the backing, which resulted in my edging being really uneven on the zig-zag cushion. By that point, I was so annoyed and it didn't look horrific (design guru didn't notice until I pointed it out). Love the backing material though. 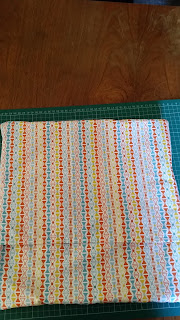 I machine-quilted around the pattern (between that and the edging fabric). I then decided to try hand quilting. One because it was something else in my sewing box I had yet to try; two because we were heading to Wales to see family and I just couldn't really bring my sewing machine! I actually enjoyed it, although I feel like my left hand needed a quilting glove! Kept stabbing myself, once or twice to the point of bleeding.

I learnt a few things:
1. Stick to the wadding I know
2. Use quilting needles from the start
3. Don't hand quilt with the pillow back already on!

My friend (who's birthday gift they were) really loved them however, so all the effort (and bleeding was worth it). I think. 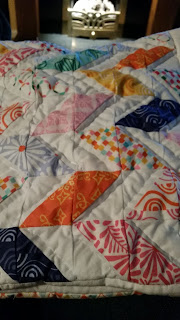 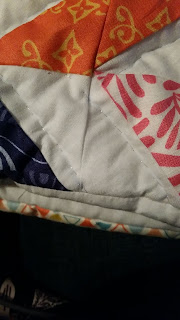