A little late to post, but I have been side-tracked by the school term about to start and slight panic over my lack of lessons! (all but the younger years are set to go now, so feeling calmer!).

My choice fell on my Disney cross-stitch (especially after I received a Dad-joke from Dad, spurring me to try and get more done!) 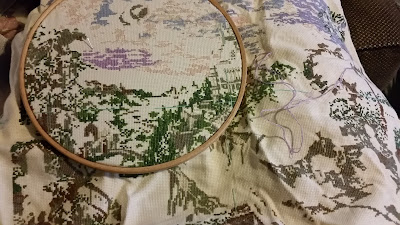 This was it as I started - really hard to work out where I was after about a year of not doing it! But I worked it out in the end (after sellotaping my pattern before the holes got any worse!)

After a weekend of work, this is where I'm at now: 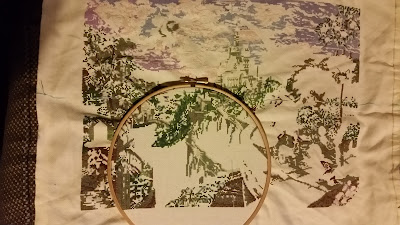 It always feels like a lot more than it looks! Added in more purple, dark brown (Belle, Beast and Cogsworth were started) and now on a pale green. Green is my nemesis but it must be done. The aida is 18 count and every single square in the pattern will be filled, so it will be slow progress. At the moment it's a game of 'spot the...'. Let me know if you spot anything familiar!