Festival of Quilts (a shorter post than I had intended)

So this Saturday I went to the Festival of Quilts at the NEC along with my big sister (the person responsible for my quilting habit!). Now I did have a lot of photos of my favourite quilts from the Festival, but my memory card decided now was the time to wipe them (so upset!!!!!).

A selection of my favourites were: 2 purely hand-quilted giant quilts that had been sewn by an 87 year old lady (she must have so much patience!); a Queen's 90th birthday quilt that had been sewn collaboratively by the Beginner's Quilt Support Group (in which the material had a lot of air miles); a Noah's Ark interactive quilt, featuring flamingos and Nelly the Elephant; one called the Dung Beetle, which featured two Giraffes wearing fine hats; one called Any Dream (as in Joseph and the Technicolour Dreamcoat) with another wonderful example of handquilting; a mosaic type quilt that when looked at the right way (especially through a camera lens) showed the image of Nelson Mandela. There were so many more that I could list for ages, but I won't.

The inevitable result was awe, fascination, resignation (that I won't manage such creative things), and a bit of brain ache working out how some of the quilts had been made - as well as some pride that I was able to visualise this a lot better than 2 years ago.

As always, I did make some purchases - although I was a lot more careful, and only picked things I needed. Ish. I have been looking for black/white/grey jelly rolls to make a quilt for the parents-in-law. I found the material we had liked at the FoQ, but it was quite pricey - and we found this material which was much nicer and should fit the bill. I'm hoping to do a log cabin type quilt, with the purple material used as a centre for each block as well as the binding.

The blue material and the silvery thread are going to be used to hand-quilt some cushions (for myself unusually). This was big sister's idea, and my more impulsive purchase. Both items are hand dyed, and the thread is soooo soft. I bought the rainbow thread as it was quite fun, and I'm sure I will put it to use at some point! I did also notice that a lot of quilts had colour fade type threads (not just one solid colour).

The book is my bargain. It has been on my wishlist since my last FoQ two years ago, so I decided to grab it. As it was a display copy, and was a bit thumbed through, I got it with a discount - felt like pointing out to the lovely cashier that a couple of curled up corners will be the least of my issues with the book once I actually start hand-quilting, as she seemed so worried I was taking it!

Overall I'm really pleased with my purchases; I am also really inspired to try out hand quilting, as I have now seen how elaborate you can be without a sewing machine! Just still really gutted I have lost all of my photos! 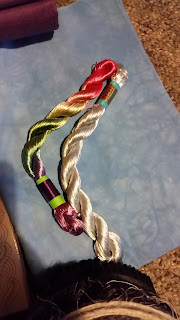 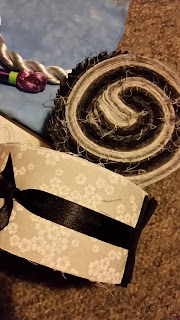